1) The intrinsic satisfaction of power and control.

The feeling that he rules, is where pleasure lies.

2) Getting his way, especially when it matters to him the most.

Happiness in a relationship depends greatly on your ability to get your needs heard and taken seriously. If these decisions are taken over by an abusive or controlling partner, you experience disappointment after disappointment, the constant sacrificing of your needs.

3) Someone to take his problems out on.

He considers himself entitled to use his partner as a kind of human garbage dump where he can litter the ordinary pains and frustrations that life brings us.

4) Free labor from her: leisure and freedom for him.

Studies have shown that a majority of women feel that their male partners don’t contribute fairly to household responsibilities. However, a woman whose partner is not abusive at least has the option to put her foot down about her workload and insist that the man pick up the slack. With an abusive man, however, if you put your foot down he either ignores you or makes you pay.

5) Being the center of attention, with priority given to his needs.

When a woman’s partner chronically mistreats her, what fills up her thoughts? Him, of course. She ponders how to soothe him so that he won’t explode, how to improve herself in his eyes, how she might delicately raise a touchy issue with him. The entire family strives to enhance his good moods and fix his bad ones, in hope he won’t start tearing pieces out of anyone. Consistently at the center of attention and getting his own way, the abuser can ensure that his emotional needs get met on his terms–a luxury he is loath to part with.

7) Ensuring that his career, education or other goals are prioritized.

Closely interwoven with financial control is the question of whose personal goals receive priority. Her own goals may also advance at times, but only as long as they don’t interfere with his.

8) Public status of partner and/or father without sacrifices.

With his strong people-pleasing skills and his lively energy when under the public gaze, he soaks up the smiles and appreciation he receives from relatives, neighbors, and people in the street who are unaware of his behavior in private.

9) The approval of his friends and relatives.

An abuser other chooses friends who are supportive of abusive attitudes. On top of that, he may come from an abusive family; in fact, his father or stepfather may have been his key role model for how to treat a female partner. If these are his social surroundings, he gets strokes for knowing how to control his partner, for “putting her in her place” from time to time and for ridiculing her complaints about him. For this man to renounce abuse, he would have to give up his cheerleading squad as well.

An abusive man subtly or overtly imposes a system in which he is exempt from the rules and standards that he applies to you. He may allow himself to have occasional affairs, “because men have their needs,” but if you so much as gaze at another man, you’re a whore. He may scream in arguments, but if you raise your voice, you’re “hysterical.” He may pick up one of your children by the ear, but if you grab your son and put him in time out for punching you in the leg, you’re a “child abuser.” He can leave his schedule open and flexible while you have to account for your time. He can point out your faults, while setting himself above criticism, so that he doesn’t have to deal with your complaints or be confronted with the effects of his selfish and destructive actions. The abusive man has the privilege of living by a special set of criteria that were designed just for him.*

You can learn more about how to identify and heal those in abusive relationships at Progressive Concepts.

*With respect and much gratitude, most of this information is taken from the book Why Does He Do That: Inside the Minds of Angry and Controlling Men by Lundy Bancroft

Learn more about how to identify and help those who are caught in abusive relationships at Progressive Concepts in Cincinnati. Click here for registration information.

*With respect and much gratitude, most of this information is taken from the book, Why Does He Do That: Inside the Minds of Angry Controlling Men by Lundy Bancroft 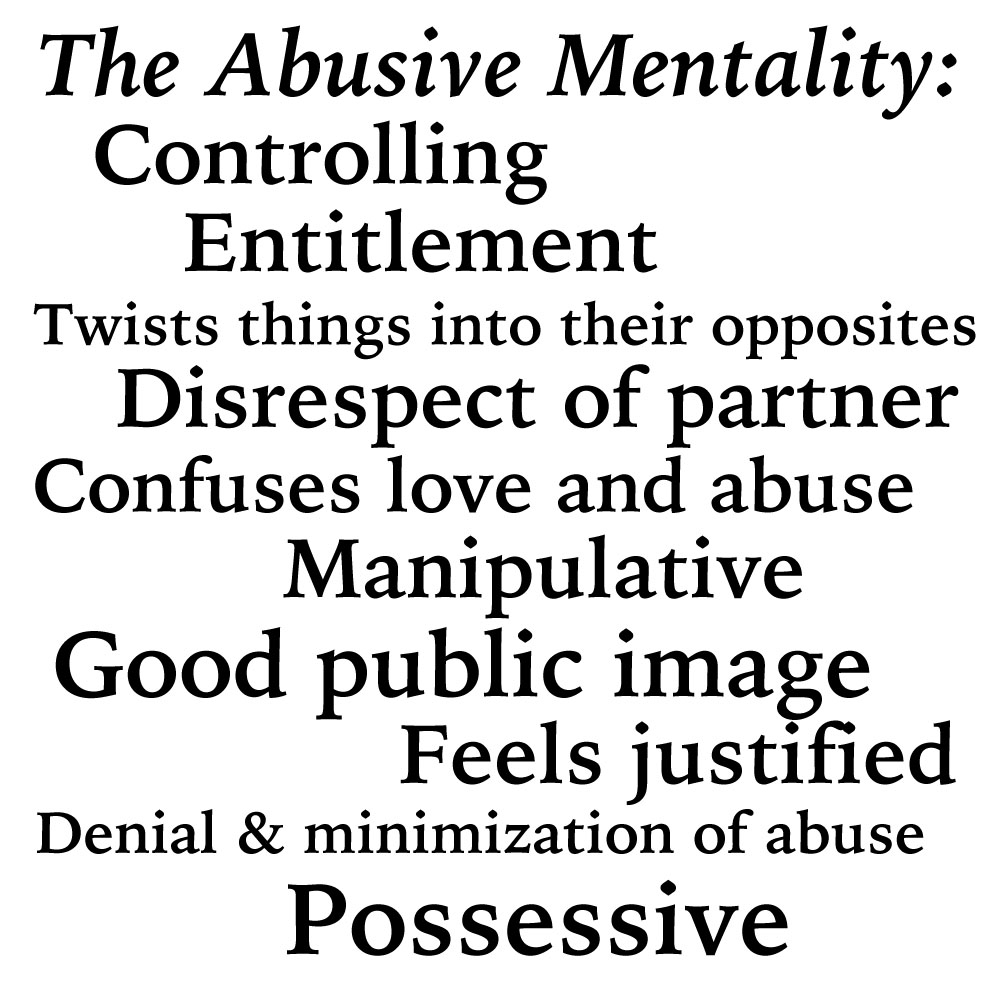 Warning #1: He is controlling.

Entitlement is the abuser’s belief that he has special status and that it provides him with exclusive rights and privileges that do not apply to his partner.

The abuser awards himself all kinds of “rights” including:

Warning #3: He twists things into their opposites.

The abuser’s highly entitled perceptual system causes him to mentally reverse aggression and self-defense. The lens of entitlement the abuser holds over his eye stands everything on its head, like a reflection in a spoon. An abuser says, “You’re saying I should lie down and let her walk all over me” because he is told that intimidating his partner is unacceptable no matter how angry he is. He says, “So you’re telling us that my partner can do anything she wants to me, and I’m not allowed to lift a finger to defend myself” because his partner told him that she was sick of his friends trashing the house and that he should clean up his own mess.” When he was told there was no excuse to call her a disgusting name, he says, “Your approach is that whatever she does is okay, because she’s a woman, but because I’m the man, there’s much stricter rules for me” with his double standards.

The abusive man has mother reason to exaggerate and ridicule his partner’s statements: He wants to avoid having to think seriously about what she is saying and struggle to digest it. He feels entitled to swat her down like a fly instead.

Warning #4: He disrespects his partner and considers himself superior to her.

He often has difficulty conceiving of her as a human being. This tendency in abusers is known as objectification or depersonalization. Most abusers verbally attack their partners in degrading, revolting ways. By the use of the most degrading word they can think of, abusers make their partners feel both debased and unsafe.

Objectification is a critical reason why an abuser tends to get worse over time. As his conscience adapts to lone level of cruelty–or violence–he builds to the next. By depersonalizing his partner, the abuser protects himself from the natural human emotions of guilt and empathy, so he can sleep at night with a clear conscience. He distances himself so far from her humanity that her feelings no longer count, or simply cease to exist.

Warning #5: He confuses love and abuse.

An abusive man often tries to convince his partner that his mistreatment of her is proof of how deeply he cares, but the reality is that abuse is the opposite of love. The more a man abuses, the more he is demonstrating that he cares only about himself. He may feel a powerful desire to receive your love and care taking, but he only wants to give love when it’s convenient.

When an abusive man feels the powerful stirring inside that other people call love, he is probably largely feeling:

Warning #6: He is manipulative.

When a woman gets shoved or slapped, she at least knows what her partner did to her. But after manipulative interaction she may have little idea what went wrong; she just knows that she feels terrible, or crazy, and that somehow it seems to be her own fault.

Warning #7: He strives to have a good public image.

Most abusive men put on a charming face for their communities, creating a sharp split between their public image and their private treatment of women and children. He may be:

Abusive men are drawn to power and control and part of how they get it is by looking good in public.

Abusers externalize responsibility for their actions, believing that their partners make them behave in abusive ways. They defend their abusive actions.

Abusive men are masters of excuse making. In this respect they are like substance abusers, who believe that everyone and everything except them is responsible for their actions.

Most abusers do have a conscience about their behavior outside the family. They may be willing to be answerable for their actions at work, or at the club or on the street. At home, however, their sense of entitlement takes over.

The abusive man commonly believes he can blame his partner for anything that goes wrong, not just his abusiveness. Did he just suffer a disappointment? She caused it. Is he embarrassed by a mistake he made? She should have prevented it. Is one of the children in a difficult period? She’s a bad mother. Everything is someone else’s fault and that “someone else” is usually her.

Most abusive men admit to some abusive behavior–although they don’t see it as abusive, of course–but they acknowledge only a small portion of what they have actually done.

A woman can feel that she is losing her mind–or developing psychiatric symptoms–if the obvious realities of her life, including abuse, are denied repeatedly by her partner. The certainty and authority in his voice, with his eyes twisted up to show how baffled he is, leave her questioning herself. “Did that really happen? Maybe it didn’t. Maybe I do over react to innocent things.” The more serious the incidents he denies, the more her grip on reality can start to slip. And if outsiders start to notice her instability, the abuser can use their observations to persuade them that her revelations of abuse by him are fantasies.

The sense of ownership is one reason why abuse tends to get worse as relationships get more serious. The more history and commitment that develop in the couple the more the abuser comes to think of his partner as a prized object. Possessiveness is at the core of the abuser’s mind-set, the spring from which all the other streams spout; on some level he feels that he owns you and therefore has the right to treat you as he sees fit.*

EPTworks™ can help those in abusive relationships by helping them regain their God-given power.

When a human being is denied the right to have needs or to express their needs in a relationship; physical and emotional sickness is the result. Most people who seek help with EPTworks™ come because of physical or emotional sickness. Understanding and knowing the patterns of abuse: Oppression and victimization will help you to realize when that pattern is part of the picture so that you can be a better counsel to your client. Understanding these patterns will also help you with more specific forgiveness statements.

In Progressive Concepts, we discuss in detail how to identify and help those who are caught in an abusive relationship. Click here to learn more and register!

*With respect and gratitude, much of this information is taken from Why Does He Do That: Inside the Minds of Angry and Controlling Men by Lundy Bancroft